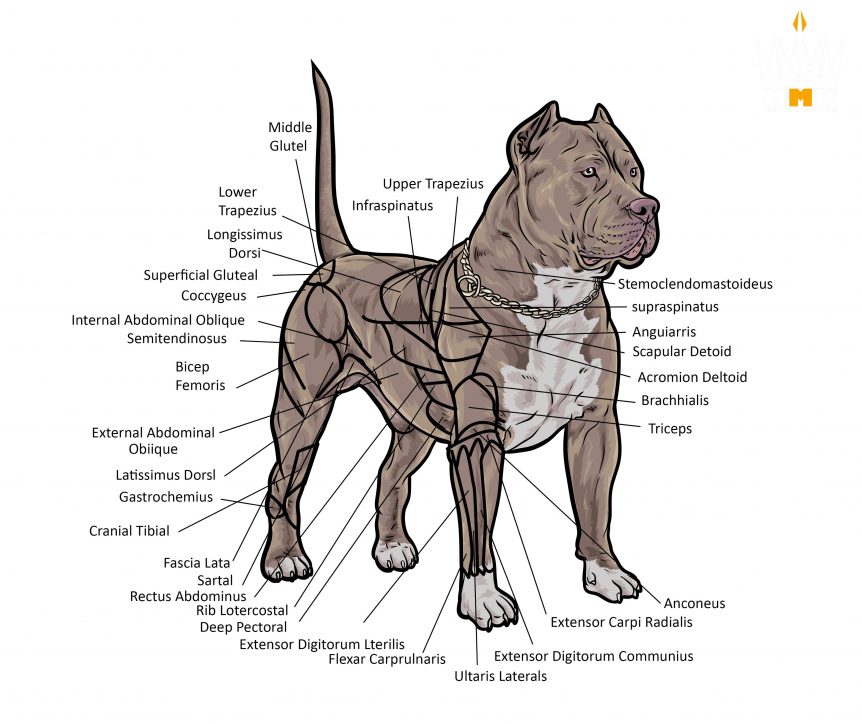 You probably have come across unique breeds like dogs from ManMade Kennels or heard of old school bloodlines like Gotti or edge bloodlines. These dogs come with super-ripped bodies and a towering gait if you are a fan of pitbull dogs. Learning the main pitbull muscle groups and what part they play in motion and overall health is a must.

Why learn about the muscle outline of pitbulls?

If you are a pitbull puppy breeder, this information is for you. It is very important if you plan to breed prized Pitbull’s or American Bullies in that can compete at dog shows. Pitbull breeders, must learn about the significant pitbull muscles, as it is necessary when considering the best pitbull workouts for your puppy. This information will also help you keep your pitbull healthy well into its senior years.

That known, what makes up the pitbull muscle groups?

There are similarities and differences between the pitbull and human body muscle structures. Like humans, Pitbull’s muscle groups use contraction to initiate limb movement. In terms of form and function, pitbull muscles are entirely different from those of humans.

The chart above shows that there is more than meets the eye when we talk about pitbull muscle gain. Yet, there are only two things you need to remember when identifying the major pitbull muscle groups. They are;

These are the primary muscles controlling the front limbs. They total to seven and comprise of;

Pectoral and trapezius muscles control the entire leg movement. The pectoral muscle is responsible for adduction, which is the movement of the limbs toward the midline. The trapezius pitbull muscle controls lateral leg movement and leg elevation.

The Biceps trachea, brachialis, and triceps brachii collectively control the movement and flex of elbows. These three muscles assist the supraspinatus muscles in extending the shoulders during exercise.

This pitbull muscle group is responsible for hind leg movement. Similarly, it is a collection of seven main muscles that are;

The Biceps femoris, semimembranosus, and semitendinosus muscles help extend and flex the hips, tarsus, and stifle. The Gluteal muscle is responsible for extending and moving the hind leg away from the midline.

The thoracic and pelvic limb muscles work in unison to create fluidity and stability during movement.

The two major muscle groups we mentioned into;

Skeletal muscles are made up of tissues and tendons that attach muscle to bone. These canine muscles are called voluntary muscles because the brain directly controls them. An example of a voluntary canine muscles is, if your pitbull dog wants to run after a toy,  the brain sends an impulse to the central nervous system, which is carried to the muscles and triggers forward movement.

Smooth muscles, on the other hand, are a lot different. They are found more profound in the body and mainly control movement in body organs. These smooth muscles are classified as involuntary muscles because they function autonomously; For example, the muscles lining the stomach contract involuntarily to push food downwards.

Cardiac muscles are the main heart muscles. They contract and relax to create a heartbeat and pump blood through the body.

Every muscle in a pitbull’s body is an interconnection of protein fibers. Pitbull dogs have two types of muscle fibers;

Lets discuss the first type of pitbull muscle fibers. The first group, Type I muscle, is a constitution of dark fibers that respond slower to impulse. These muscle fibers have the most prolonged latency and are responsible for maintaining canine posture.

On the other hand, Type 2 muscle fibers have quick response and come in handy in controlling swift movements like running or diving. These muscles have the shortest twitch response.

Both Types I and Type 2 muscle fibers are found in various muscles in a pitbull’s body.

All pitbull muscle groups work in synchrony to facilitate movement. No muscle group can act alone to create movement or flexing. The muscles that contract to pull the limbs cannot exert an equally pushed force. The canine, therefore, depend on other muscles groups to do the job.

Now for the crucial question.

What muscles do Pit bulls use most when exercising?

The pitbull muscle groups used by your pup depend on the type of activity he is doing. Pitbull dogs love long walks, running, swimming, and tug of war.

Long walks mostly engage the pectoral muscles and rarely the back muscles. The trapezius, biceps, semitendinosus, and gluteal muscles are highly used in this activity. Other muscles used in walking include rib intercostal, rectus abdominus, sartorius, and quadriceps.

Running puts the muscles to work in supporting balance and joint movement. The biceps, triceps, gluteals, and semitendinosus are very engaged in this action. Also, your Pitbull pup will rely on additional muscles like longissimus dorsi, latissimus dorsi, epaxial, and sartorius to pick up or maintain running speed.

Swimming creates a lot of resistance in movement. A pit bull dog will engage almost all muscle groups to float or paddle forward. Muscles involved in this activity include the lower trapezius, biceps, triceps, supraspinatus, infraspinatus, semitendinosus, gluteal, epaxial, and deltoids. Other muscles involved are the bicep femoris and quadriceps.

How to tone the muscles on your pitbull

Proteins are the building blocks for muscles. If you want your pit bull dog to bulk up, you will have to feed them a healthy diet combined with pet supplements that add more vitamins and minerals to their diet.

A raw diet for dogs enriched with proteins is a proven formula for helping Pitbulls, especially extremely Pitbulls, gain muscle mass. If you cannot balance the proteins, fortifying your dog’s diet with a pet supplement like Bullyade pet supplements ensures that your dog is getting all the necessary amino acids for pitbull muscle gain.