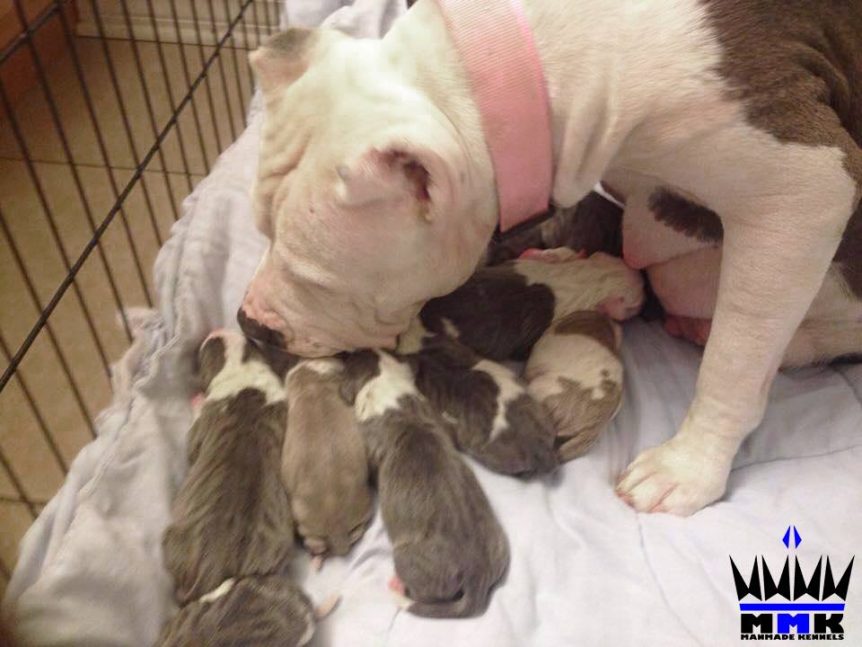 So your dog just had a litter and you couldn’t be more excited. However, you notice that the mother dog is not feeding her pups and that is cause for concern. What could be the reason for the mother dog not feeding puppies or neglecting them?

When a mother dog gives birth to her litter, maternal instincts usually take over. She will want to clean the puppies and provide them with milk so they can absorb the nutrient-rich colostrum, which is essential for the first few days of their development.  Mother’s milk gives puppies important antibodies they need to build up a strong immune system besides nourishing the puppies’ bodies.

However, there may be times when a bitch acts inappropriately after giving birth and exhibits a lack of interest in her puppies, raising serious concerns for their wellbeing. Should this occur, you might wonder why your bitch isn’t interested in her puppies and what you can do to help her.

So what is the reason for the mother dog not feeding puppies?

It is not normal for a mother dog to reject her puppies when the puppies need nursing. When the dam refuses to suckle her pups or give them the post-natal care they deserve, it could be due to an underlying sickness.

Metritis is a bacterial uterine infection that typically affects mother dogs during birth or after delivery. Spreading it could be fatal. It results in symptoms like fever, anorexia, and pungent vaginal discharge. Dog mothers that have acute metritis will not breastfeed their puppies. In severe situations, the litter may need to be nursed on artificial milk formula. This disease requires immediate veterinarian care.

It is also known as puerperal tetany and is brought on by a breastfeeding female’s blood calcium levels dropping dangerously. If a mother dog’s calcium levels are insufficient to offset the calcium loss through breast milk, she may develop eclampsia. Usually, it appears two to four weeks after delivery.

The main warning indications include

If the mother dog rejects and stops nursing her pups, it is another telltale sign of eclampsia. Dogs with eclampsia need immediate medical attention, which is crucial. Puppies must frequently be raised on formula. The mother dog will need to take a calcium supplement if breastfeeding continues.

Canine mastitis is another reason for the mother dog not feeding puppies. Mastitis is a bacterial infection that affects one or more of the dog’s breasts, which swell and are excruciatingly painful. In addition to the fact that nursing would be extremely difficult for the bitch, the infection could make her milk toxic for her young. Additionally, the milk’s appearance may alter, and puppies themselves may reject it. When the infection has been effectively treated, the puppies can resume breastfeeding.

Any of these infections could cause the mother dog not to feed and care for puppies. There are other underlying reasons for mother dog not feeding puppies that are not caused by sickness. They include;

No milk in the mother dog

The mother dog may produce milk but the milk fails to flow through the teats. Puppies are unable to draw milk no matter how hard they suckle. When this happens, it is usually because the dog is stressed or may have deformed nipples. It is not uncommon for the mother dog to abandon its litter if it cannot express milk through the nipples. Fortunately, this condition can be treated, and have the pups feeding in no time.

Agalactia is a condition where the mother dog is unable to produce enough milk for the pups. Conditions like mastitis and systemic diseases may trigger agalactia. Also, a mother dog may fail to produce enough milk if it is not getting enough nutrients in its diet. If the dog is eating a healthy diet, then maybe the litter is too large to provide proper care for each pup.

A cesarean birth may interfere with the mother dog’s ability to bond with the puppies immediately after they are born. This interference could lead to the mother dog not feeding puppies which is why a cesarean section should always be done by a trained vet and a professional pitbull breeder.

Mother dog rejects puppies, What Should You Do?

Mother dog not feeding puppies immediately when they are born? It is unusual for a mother dog not to care for puppies that are less than two months old. When you notice this anomaly, your first decision should be to take the bitch to a vet for a checkup.

Any underlying infection like mastitis will be treated and the dam will be nursing the pups in no time.

Another common phenomenon among nursing dogs is the rejection of one puppy within a litter. This usually happens when the mother dog senses weakness in the said puppy. Usually, it is because the puppy was born deformed or has other physical disadvantages that lower the puppy’s survival rate. Some p

Also, a mother dog will neglect a ‘sickly’ pup with the following conditions;

Keep an eye on your dog’s new litter to see if there is any neglected pup. Usually, the mother dog pays no attention to that pup or separates it from the rest.

Once you identify the neglected puppy, take it to the vet for a proper diagnosis. Your vet will recommend a recovery for the pup

If the mother dog is biting or growling at the puppies when they try to feed, it is her way of teaching them independence. Only interfere if the bitch becomes excessively aggressive with the puppies. You should also start the puppies on healthy homemade foods with healthy ingredients that will aid in their growth and development.

What to do after mother dog stops feeding puppies

If the mother dog stops feeding puppies under 2 months old, you will have to nurse the pups until the mother dog finally accepts them or until they are strong enough to be independent. Bottle feeding with a high-quality milk formula is the best option for puppies that are at least one month old. Puppies less than a month old will benefit more from tube feeding.

Bottle-feed the puppies with a high-quality milk formula made for newborn pups. Most dog stores and vet clinics do have milk formulas for puppies that have been prematurely weaned. Consult with a trained vet too before feeding your puppy formula. You want to be sure that the milk formula chosen has all the essential nutrients to supplement the ones they are missing out from the mother’s milk.

The best milk replacer for puppies should have the following ingredients;

The mother dog not feeding puppies could be due to many reasons. One reason could be that the bitch has an underlying sickness that is making it hard to nurse the pups. It could also be the weaning season for the pups and the mother dog is trying to teach them independence. Sometimes the mother dog could reject one puppy or a few from the litter, and oftentimes it is because the puppies appear weak and have a slim chance of surviving.

Nurse neglected puppies with quality milk formula designed for newborn pups. Also, ensure the mother dog is treated for any underlying condition so that it can go back to nursing the pups.