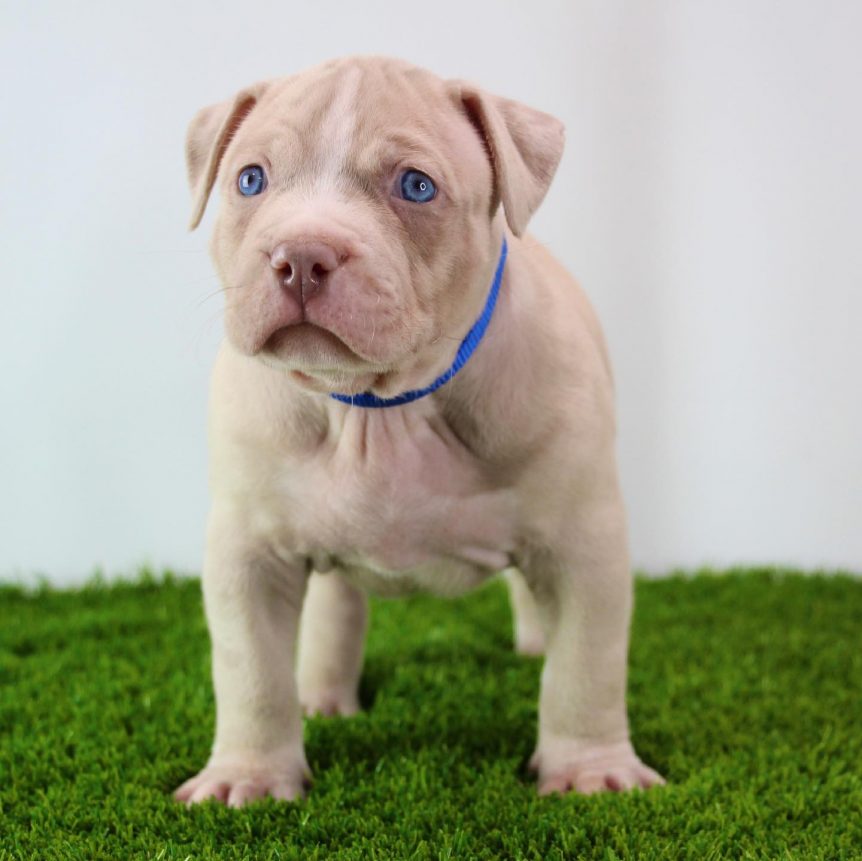 What a lot of people don’t realize is the fact that a newborn blue eyed pitbull puppy does not have its eyes open at birth. However, after a week or two, the eyes start to open, and you can notice the beautiful blue hue in the pupils. Note that you don’t get any hints of the final eye color right away. It is why you get a blue eyed pitbull puppy at first, although as we said, the color will change.

When the blue-yed pitbull puppy is 3-4 months old, it will have developed its final eye color. Initially, everything is diamond blue, but it changes to either hazel, gray, dark brown, and many others. It can take up to an entire year for the color change. However, on some occasions, it can only take a few months at most.

Most of the time, the eye color will darken, but it’s not a rule all the time. There is a pitbull variety that is known for having eyes with changing colors. While it’s common to see a blue eyed pitbull puppy, that’s not the case for adults. Usually, the adult Pitbulls will have hazel or brown eyes, which is something to consider here.

What’s the reason the eye color changes with time?

It all comes down to the genetic markup or genotype. Most dogs are known to have brown eyes, but there are differences based on their breed. Coat color and eye color complement each other in many cases, and genetics can bring in some coat tone into the eye color. But as you can imagine, any variations like these rarely stay the same, which is something to consider.

There are lots of pitbull puppy with blue eyes at first, and they will also have a lighter coat. But as time goes by, their coat coloring will change, and that’s certainly something to take into account as time goes by.

Trying to breed for a specific color

Finding blue eyed pitbull puppies for sale is very difficult, which is why a lot of people breed them for this specific color. Yet, the problem with this is that breeders will disregard other necessary elements like temperament, structure, and health. Sure, breeding for a specific color sounds amazing, but it also has its fair share of challenges.

If you try to breed for colors like blue, gray, or anything rare like that, you will have to outcross other gene pools. It is why the pitbull puppy with blue eyes prices tend to be very high. The breeding process is tedious, and not every pitbull breeder is savvy to the complex science behind it. Plus, as we already noted, there can be some health or temperament problems when trying to favor this specific eye color.

What’s the rarity of a blue eyed pitbull puppy?

Even though this color is rare for adults, that’s not the case for puppies. They all tend to have this color in the beginning. If the color stays the same for more than a year, then that’s indeed rare, and something to take into account. Even so, not all pups will have this color, but most of them will so try to keep that in mind.

There is a myth that blue eyed pitbull puppies, and other dog breeds, are doomed to develop vision-related problems. This scenario is unlikely, although it also depends on how the blue eyed puppy color formed in the first place. According to science, Pitbulls are not carrying a breed-specific gene, so they are prone to develop vision-related issues later. If you are breeding blue eyed pitbull puppies for sale, you must avoid pitbull breeds that suffer from albinism or have the Merle gene.

There are multiple dog breeds known to have blue eyes. The Dalmatians, Australian Shepherd, Catahoula Leopard Dog, Border Collie, and Siberian Husky all have blue eyes. These dogs have a genetic makeup specific to their breed, which produces blue eyes. That gene is usually known for not affecting their health. However, if you see dogs outside of these breeds with blue eyes, they can have health issues since that gene is inserted artificially and it’s not something natural.

Buying a pitbull puppy with blue eyes is a great idea since they look amazing, and they can be a rare purchase. But at the same time, you have to keep in mind that their eye color is not permanent. They will lose it within a year at most, as the eyes transform to brown, hazel, or other similar colors. Despite that, it’s still extraordinary to see a blue eyed pitbull puppy, so if you are interested in this type of dog, you should check them out. It’s certainly unlike anything that you can see when compared to other breeds!